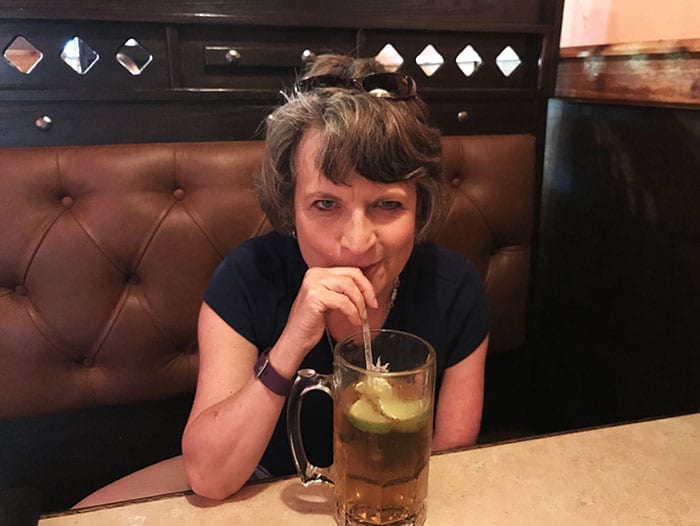 For more than 45 years I worked hard to hide my physical differences and associated struggles, first by instinct and later as a defense against unwanted attention. Each decade became more difficult until I could no longer hide my escalating physical challenges. It took more than a decade to be at peace with this.

The first step was wearing a sleeveless dress to my eldest daughter’s wedding. I shopped and shopped, trying to find a jacket to go with the sleeveless dress I finally chose. I considered trying to sew something but, by this time, I was in a deep cycle of anxiety and depression. My daughters didn’t understand the problem. Who wears a jacket to an August wedding? They were surprised to learn I was self-conscious because I had never spoken about my struggles with them or anyone else. They assured me I’d look just fine.

I knew in my heart I would regret the decision every time I saw the family photo hanging on our living room wall. And I was right. For many years, I hated looking at that photo. Other women probably feel gorgeous in a dress like that; their hair and makeup professionally done, dancing with their handsome husband. I just felt like a fraud. I could never be beautiful with two deformed arms extending from the short sleeves of my dress.

And yet, when my second daughter got married, I did it again. There I was in a sleeveless dress, revealing my biggest flaw, one that invited stares and looks of pity. If the guests were all people I knew, I wouldn’t have been self-conscious. But here they were, dozens of family and friends of the groom who had never met me before. Both times, I didn’t want to draw attention away from my beautiful brides or embarrass anyone else.

Shortly before the wedding, my fears were fueled by a letter to an advice columnist from a man whose face had been disfigured in a fire. His son’s future mother-in-law insisted he not attend the wedding because young guests would be frightened by his appearance. Like me, the man was inclined to do whatever it took to minimize any impact on his family.

Looking at the photos of my second daughter’s wedding did not reassure me. My upper back is more rounded than I realized and I walked awkwardly in the pumps. I’d given up heels years earlier when the twisting migrated from my short arms to my spine and hips.

I walk past those photos in my living room every day now and sometimes I pause to study them. I consider it part of the homework my therapist assigned: to watch myself in the mirror during yoga class. She said my situation was similar to women with anorexia who look at their too-thin bodies in a mirror and see a fat person looking back at them. Except I avoided photos and videos of myself so I could imagine the opposite: that I look just fine. She said it was a defense mechanism that allowed me to move confidently through life, ignoring or burying the stares and rude comments until the incidents I held deep in my subconscious piled up and refused to be silenced any longer.

Last year a good friend encouraged me to help “normalize” disability. Stop trying to hide it and show the world that people with disabilities can be smart, confident and successful, she said. Confront the pity and demand to be treated with dignity. My friend’s daughter also struggles with a disability and has expressed similar feelings about calling attention to herself.

After a while, I began to understand that she was right. There’s no shame in being a person with a disability. Or at least there shouldn’t be. I was surprised to meet a 60-year-old man recently who told me about the year he broke his neck in a diving accident and became a paraplegic. He was embarrassed to go outside because he didn’t want people to see him in a wheelchair. He was 15 years old. Today he’s embarrassed by all kinds of things, like having to open a bottle of water with his teeth.

“Really?” I said. “So am I! I’m too embarrassed to ask someone to open it for me and refuse to use my teeth unless I can do it when no one is looking, so I just don’t drink it.”

“Wow!” he said. Neither of us knew that others feel the same.

The next week a retired teacher who was recovering from knee surgery came to church using a walker. She told me she almost stayed home because she didn’t want people looking at her. I said they would really look at her if she fell instead.

Suddenly it all seems so stupid. Why should we have to feel embarrassed because of something we have no control over? My friend was right, hiding just contributes to negative perceptions. It’s hard to advocate for myself but easy to do so for others.

Every day now I work to normalize disability. I focus on greeting people cheerfully so they can smile and say hello instead of staring at my arms in my new sleeveless shirts this summer. It feels great to shed the jeans and long sleeve shirts and just be comfortable instead of sweating. I see the children look at me at the dog park before running down the path to catch up with their parents. Who cares if they talk about me once I’m out of sight?

But old habits die hard and I’m not always willing to be so vulnerable. At a local Mexican restaurant tonight, the server brought me a 32-ounce beer instead of the smaller size I ordered. The mug was too heavy so my husband suggested I ask for a smaller glass.

Not wanting to call attention to myself I said, “Never mind, I’ll just leave it on the table and tip it to sip from until it’s lighter.”

“How about a straw?” he said. I’ve mentioned using a straw before but never did it. I did not want to call attention to myself by asking for a smaller glass and certainly not a straw!

When the server returned, he asked for two straws and we drank our beers together. It was really no big deal, he said, it was even kind of fun. And so it was.

(This essay was first published on a former blog “View From the Hill, Reflections on Life” by Carolyn Farmer Sampson.)