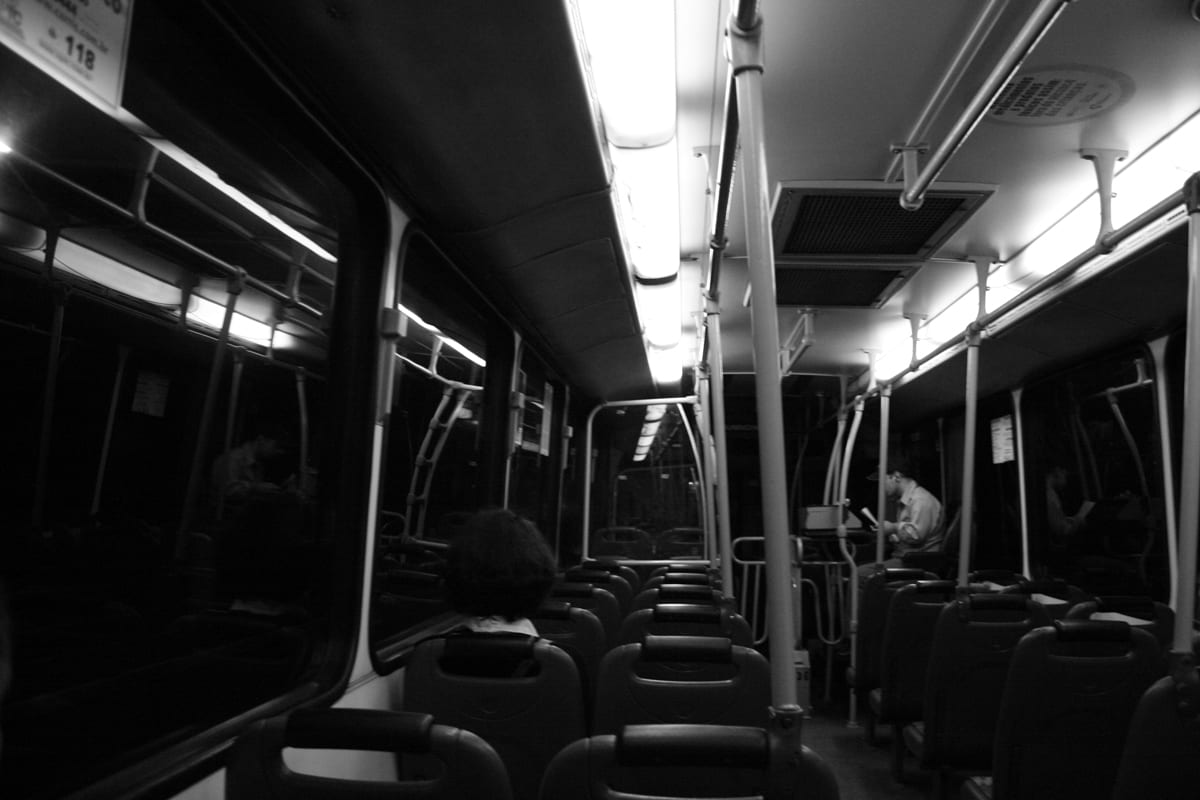 “Oh my God! Were you a thalidomide baby?”

A gray-haired man stood staring at my disfigured arms and hands. Trapped in the aisle, my heart raced. I had never heard the word thalidomide and had no idea that anything or anyone other than God was responsible for my birth defect. But this was no time to ask questions, the bus driver was waiting for me to get off.

“No!” I said, squeezing past him. I hurried down the steps and up the street, careful not to notice whether the rude man and other passengers were staring after me. With our house only half a block away, there was little time to consider what he was talking about or why I had never been asked this before.

“Carolyn?”  Mom stood at the kitchen table in her polyester shorts and ill-fitting tank top, sorting through the ever-present piles of letters, bills, catalogs and coupons. She barely looked up as the screen door banged shut behind me.

“Mom! A man on the bus just asked if I was a thalidomide baby. Was I?”

“Well.” Her eyes widened and the single word drew into a whine. Shocked to realize that she seemed to know what a thalidomide baby was, I waited.

“A car accident? You never told me about that. Was it a bad accident? Who was driving?”

“Dad was driving. It was just a fender bender.”

I had never heard of diabetes or a minor car accident causing a birth defect. Why had none of this ever been mentioned?

“But the doctor said some babies are just born this way,” Mom said.

“So what is a thalidomide baby?” I asked.

“I took a medication when I was pregnant with you. It might have been thalidomide but we really don’t know.”

Suddenly I realized the life story I’d been told was a carefully constructed lie, and the truth a closely held secret.

The conversation ended abruptly when my three younger siblings came in for supper. But even if we hadn’t been interrupted, Mom’s failure to further explain what she knew about thalidomide babies and why this had never been mentioned was a silent deterrent to further questions. The doctor didn’t know what caused my birth defects and that was the end of it.

We were not the kind of family that ever discussed current events or confided in each other. Supper progressed with the usual bickering while Mom nagged us to stop swiveling in our chairs and finish our milk. Thalidomide babies weren’t mentioned, by me or my mother, to anyone else for years to come.

Dad had left our family and moved in with another woman a year earlier. I didn’t see or talk to him very often but even when I did I was reluctant to ask about thalidomide. Mom said his diabetes might have caused my birth defect and he felt bad about that. Making my father feel bad just wasn’t an option.

Nearly three decades passed before the consequence of this dynamic reared its ugly head in the form of severe anxiety and depression. In a desperate attempt to find my way out of the pit, I learned that depression often comes from not being authentic. In my mind, I was completely authentic; I had even been told so by others. Approachable, compassionate, direct.

In the years after leaving my childhood home, I worked hard to advance from an entry-level job to corporate marketing positions. I was proud of “not letting my disability define me.” I knew my physical limitations but pushed myself to do as much as I could within those boundaries. I believed I had no emotional boundaries. Although I certainly went through periods of self-doubt and lack of confidence, like any human being, I worked hard to feel and appear confident in the world. Props like long-sleeved clothes helped a lot. It was pretty easy to hide behind those clothes and other adaptations, like never using my hands to talk, if I didn’t want the world to see my deformities. I was even confident speaking in public if I could hide my hands and arms while doing it.

Eventually, after many years in therapy talking about everything except my physical appearance, I began to realize that this was the inauthentic part of my being. At home with my immediate family, I wore tank tops and did chores like everyone else. At work and in volunteer positions I avoided doing anything physical when people were watching. I went to conferences early and set up my trade show display before anyone else came. I simply couldn’t bear people’s pitying glances and well-meaning rush to help when they saw me struggling. They might not think of me as a professional peer if I needed assistance.

As I slowly began acknowledging this internal struggle, I realized the hiding and pretending was wearing on me.

When I tried to figure out why it was so hard to ask for help, I remembered my dismay when my mother grew tired of putting my hair into pigtails for me and insisted I cut it. Here I was, past 50 years old, still hurt by that first time I realized there were things I would not be able to do for myself. When I tried to talk to my mother about it, she grew extremely defensive, which caused my sister to chastise me for “making Mom feel bad.”

Yes, I finally realized, all my “confidence” and “bravery” and “overcoming limitations” as defined by others, was actually a finely honed skill for never making anyone feel bad or uncomfortable or guilty for the things they had that I did not, like two normal arms. And two normal arms meant they had other things I did not, like a date to the prom, the ability to participate in school sports without dragging down the team score, the ability to hold hands with boys in gym class during the square dancing unit, the ability to wear tank tops and bikinis in the summer without being stared at like a circus sideshow. Seriously. If you’ve seen the recent movie “The Greatest Showman” you know it hasn’t been that many years since people with deformities and oddities were literally unable to land a job outside a circus sideshow.

A couple of years ago I asked my mother, “If the man on the bus hadn’t crossed my path that day and told me about thalidomide, when were you going to tell me?”

We’ve come a long way since the days of circus sideshows and shaming mothers whose babies have deformities, even if not far enough. Future essays will reveal more of my journey, and my mother’s, to finally make peace with the tragedy that affected every thalidomide victim and survivor, our mothers, fathers and siblings.

(This essay was first published on a former blog “View From the Hill, Reflections on Life” by Carolyn Farmer Sampson)