You can call me “JoJo.” My name is Jose Martynov G. Calora. I was born in 1962 in Ithaca, New York, with congenital deformities in my upper extremities. I have short arms, no elbows, and three fingers on each hand. The technical term is phocomelia. My parents were shocked and saddened when I was born. They did not know what caused my congenital deformities. We had no history of phocomelia in the family. My Dad was pursuing a doctorate at Cornell University; my Mom and two older brothers were with him.
A few months after I was born and after my Dad earned his doctorate, we all moved back to the Philippines, where I grew up. In the Philippines, my mother stumbled upon an article in Reader’s Digest about thalidomide. After reading the article, she remembered when she was given free sample medication by her physician for nausea from motion sickness. She connected the dots and realized that my deformities may have been due to that free sample medication provided by her physician. At that time, thalidomide samples were being given to patients by physicians. 2.5 million thalidomide samples were distributed in the United States in the late ’50s and early ’60s before the pharmaceutical company was forced to withdraw their New Drug Application (NDA) from the U.S. Food and Drug Administration due to reports of birth defects caused by thalidomide embryopathy.
My parents did not know anything better than to send me to regular schools. In pre-school, my classmates were too young and innocent to notice my limb difference. In elementary school, it was a different experience. I was the only child with limb differences. I got used to other school children staring at my arms and hands, following me around the school to stare. Eventually, the other school children got used to my presence in the school. As a teenager, the curvature of my spine became more apparent. I had severe S-shaped scoliosis and a hump on the right side of my back. In high school, I was teased and made fun of because of the hump on my back. I laughed it off. On the outside, I was a jolly and funny kid; deep inside, it hurt. In college, I participated in extra-curricular activities and a handful of student organizations. I earned a Bachelor of Science in Statistics from the University of the Philippines at Los Baños and then migrated back to the United States.
With five hundred dollars in pocket money from my parents and two suitcases of personal belongings, I moved back to the United States. I initially stayed with an uncle until I could find a job and afford my own apartment. For my first job in New Jersey, my employer, had to make sure that I could perform the job of an Insurance Rater/Coder. It involved reading big and heavy rating manuals to find the applicable rate, performing simple math to calculate the insurance premium, and relaying that information to the customer by phone. I found out from the person I used as my reference that they were concerned about my capability to perform the job, most likely because of how my arms and hands looked. After working there for a few months, I resigned and accepted a programmer trainee position at another insurance company. When I was still in the Philippines, I took programming classes in the hopes of working as a computer programmer in the future. So this new job was exciting to me. After completing my programmer training classes, I became a programmer analyst for that company. 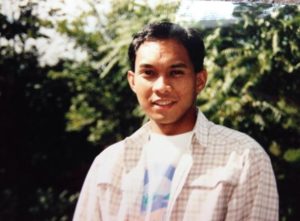 Two years after working as a programmer analyst, I had spine surgery to prevent my scoliosis from further compressing my left lung. My scoliosis was so severe that the orthopedic surgeons I consulted in New Jersey and New York City recommended that I see the best spine specialists at that time, located in the Twin Cities in Minnesota. The spine specialist corrected the curvature of my spine as much as he could, performed spinal fusion, and installed three pieces of titanium rods on my spine. Because of the spine surgery, I found out that some of my vertebrae were not fully segmented. Recently, I found out that various vertebral column issues have been reported in thalidomide survivors.
After living in New Jersey for ten years, I moved to Oregon to work for an air freight company. The pace of life was different in Oregon. From the “I needed it yesterday” pace of the Northeast to the “wait for the pedestrian light to turn green before you cross the street” pace of Oregon, it took me about two years to adjust. I remember clearly the moment I felt that I had made the adjustment. I was on my commute to work on a forest road. Yes, there is a forest right in the city of Portland. While waiting for my turn at a four-way stop intersection at the top of a hill, the sight of drizzling rain, fog, and pine trees around me was just beautiful and peaceful. I started a family in Oregon. My wife and I have two daughters. Between family and work, I went to Graduate School to earn a Master of Science in Software Engineering from Carnegie Mellon University. I have been working as a Technology Project Manager for a logistics company in Portland, Oregon.
In 2018, I started to look again for information about the thalidomide tragedy and its impact in the United States. Most of the items generated in a Google search were about thalidomide in countries other than the United States. I joined a Facebook Group and met other American thalidomide survivors. It was like finally finding my tribe. I attended the group’s first gathering in Atlanta, Georgia, on March 1-4, 2018. It was great to be around people with limb differences like me. It was the first time for me to observe myself on others, how I look and how I move. It was like an out-of-body experience. I listened and shared experiences. Some thalidomide survivors had to retire early due to pain and disability. I heard stories about overworked joints and muscles to compensate for their deformities. Some could not afford the expensive pain medications. One was homebound because her van was too old, broken down, and too costly to repair. I heard other life challenges thalidomide survivors had to endure while growing up and their early-onset age-related issues making life difficult.
At the Atlanta Gathering, I proposed forming a nonprofit organization to advocate for and support the American thalidomide survivor community. A majority of the attendees agreed, and the nonprofit U.S. Thalidomide Survivors was incorporated in Minnesota on September 5, 2018.
I volunteer at the nonprofit U.S. Thalidomide Survivors because I strongly believe in its mission – increasing public awareness of the real history of thalidomide in the USA, advocating for thalidomide survivors, improving access to information beneficial to thalidomide survivors, and providing a supportive community for American thalidomide survivors.
Please join me in supporting the nonprofit U.S. Thalidomide Survivors to help set our story straight and find a way to assist the American thalidomide survivors live the remainder of their lives with dignity.