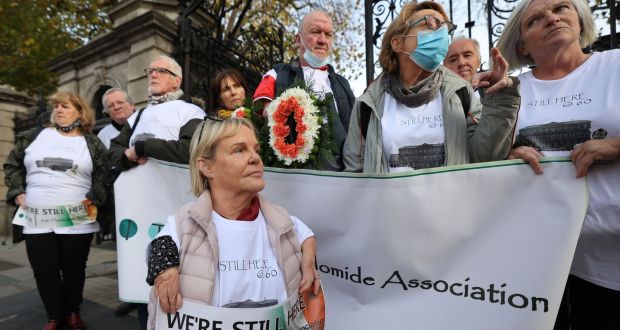 The Government is coming under increasing pressure to issue a State apology to Thalidomide survivors after the German family behind the drug apologised personally to those damaged by its product.

An estimated 5,000 children in Germany and 10,000 worldwide were born without limbs or with limbs foreshortened, with impairments to hearing and vision, as well as injury to internal organs. Their mothers had taken a drug when pregnant that was sold under the trade name Contergan.

It was manufactured in Germany by the family-owned Grünenthal company and sold under licence in 70 countries worldwide.

“We cannot change what happened… the Contergan tragedy is part of our company history and we regret deeply the far-reaching consequences,” said Dr Michael Wirtz, chief executive of Grünenthal and son of the company founder.

Between four and five out of every 10 children who were exposed to the drug died shortly after birth. Sold in Ireland as Thalidomide, it was used to treat morning sickness in pregnancy and today there are some 40 survivors in Ireland.

Ireland was one of the last jurisdictions to withdraw the drug, some nine months after it was withdrawn internationally.

The Irish Thalidomide Association (ITA) has called for the State to also “finally apologise” for the delay in withdrawing the drug from the Irish market and establish a “fair and equitable” compensation package for survivors.

The Department of Health on Monday said it was not possible to comment at present due to a number of cases before the High Court. However, a spokeswoman said the Government was “committed to the continued support of the health and personal social service needs of Irish Thalidomide survivors”.

Association spokeswoman Finola Cassidy said: “The irony is that in Ireland, Grünenthal have not admitted responsibility as per their legal defence delivered in the litigation here. Yet, internationally they have apologised. This is inconsistent.

“The company should specify if the apology applies to Ireland too and should put pressure on the Irish Government to also apologise. The Grünenthal apology should create a situation where a similar statement together hopefully with an acknowledgement of wrong perpetrated by the State occurs here.”

Unless the company withdrew its defence of the cases taken by survivors, “little degree of credence can be given to the genuineness of their apology after 60 years”, she said.

The apology from the Wirtz family comes exactly 60 years after it withdrew the drug from sale. At an event to mark that anniversary, Michael Wirtz said his family was sorry for “everything in these past 60 years”.

He said survivors expected his family to comment and “not hide behind a legal adviser or the Grünenthal company”.

In a video, played at a gathering of Germany’s association of Contergan survivors to mark the anniversary, Mr Wirtz said he wanted to state “in public and officially with witnesses, that I formally apologise for these issues that have happened to you and all your families”.

After the drug went on the market in the late-1950s, doctors in Germany and around the world observed nerve damage in adults followed by an increase in deformities in children.

As cases became more frequent, Germany’s Welt am Sonntag published a report in November 1961 flagging the suspected links to the drug, advertised as being “harmless as a sugar cookie”. A day after the report appeared, the product was withdrawn.

In 1968, senior Grünenthal figures went on trial accused of bodily harm and criminal homicide. The trial ended in 1970 with no verdict after a settlement was reached between the firm and the West German federal government. As part of the agreement, the firm paid DM100 million (€51 million) into a Contergan foundation, to finance pension and other payments to survivors, and made a second payment of €50 million in 2009.

The federal government added about €160 million to the fund, out of which one-off payments and monthly pensions were paid. A company spokesman said some Irish survivors were paid out of the fund, which is now financed entirely by the German taxpayer.

Read the article and related links by clicking here.