Why we had to make “Thalidomide in the USA: the Forgotten Survivors”

The fact that the world still thinks there were no — or very few — thalidomide survivors born in the US is still a source of amazement for me. We have done an exceptional job, I feel, of documenting our story in this website, and traffic has increased each month. US survivors have found each other in greater numbers than ever during this past decade. Yet much of the world still remains stuck in the campaign of misinformation that spread in the 60s: that thalidomide had not hit the US.

It was this reality that spurred us on in a mission to create the first documentary, by and about US survivors, and starring the survivors, themselves. Thalidomide in the USA: the Forgotten Survivors is slated for release in the near future in conjunction with the upcoming Random House book by Jennifer Vanderbes (title still to be determined). But the film has been made! 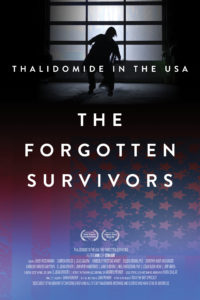 We filmed the content at the 2nd USTS conference which took place in November, 2019 in San Diego, California. While conference events were going on, and everyone got to know each other, volunteers were pulled one by one into interview sessions with me in my director role, and filmed by a volunteer film crew (Andy Penner and Yasin Daulat). Our budget was $0, powered by commitment to the cause and a lot of coffee!

The stars of this film are the survivors, themselves, who were, in their order of appearance: Gwen Riechmann, Darren Griggs, JoJo Calora, Kimberly Firestone Arndt, Eileen Cronin, PhD, Dorothy Hunt-Honsinger, Carolyn Farmer Sampson, Jane Gibbons, Leslie Klein Mink, Jeff Green, and myself. Making a special appearance with some of the scientific background was Professor Neil Vargesson, PhD; and, of course, with historical perspective and hard facts, author Jennifer Vanderbes.

The film pulls from history and science for context, but it is the words of the survivors that come through with the unique message. What made the United States truly singular in its thalidomide experience was the fact that each of the survivors interviewed had the same experience of being told they “couldn’t possibly” be survivors, because “thalidomide had never come to the US.” They had been discouraged from finding the truth all along the way; by parents who were sometimes in denial or feeling shame; by parents who were duped and gaslighted by obstetricians, and obstetricians who were desperately trying to cover their tracks; by doctors who simply didn’t know and didn’t try to find out; and by the news media.

Why did the news media push forward in the 1960s, so aggressively, the story that the US had been “spared” the thalidomide tragedy? 2.5 million tablets had been distributed in the US as samples in anticipation of FDA approval, but this story was not the one the media told.

The media, instead, told the story that America wanted to hear. The early 60s was an era of great civil unrest. The war in Vietnam; the Cuban Missile Crisis; then John F. Kennedy was assassinated; anti-racists Chaney, Goodman and Schwerner were lynched in Mississippi; Martin Luther King, Jr. was assassinated, as well as Robert Kennedy and Malcolm X, while cities burned amid riots and deadly protests. With so much bad news, I imagine the American public was desperate for something positive. 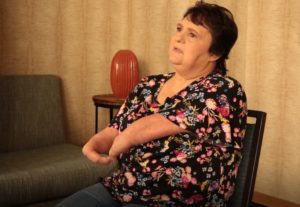 The story that America wanted to hear was Dr. Frances Kelsey’s story. She was the reviewer for the FDA, whose sharp questioning of the lack of evidence on the safety of thalidomide delayed its approval. She stood up to pressures from within the FDA to swiftly approve the drug, and enormous pressure from the pharmaceutical companies, but she held her ground. Thalidomide was never approved by the FDA, and never able to be prescribed in the US. For her efforts, she was given the President’s Award for Distinguished Federal Civilian Service.

The story didn’t stop there; but that’s where America wanted it to stop. This was fantastic news, during a dark time. Americans were desperate for something positive, a success, to cling to as they reeled from the other tragedies.

The 2.5 million tablets were not news enough. The record keeping was so bad, or non-existent about what had happened with those tablets, that it was easier to pretend they had never existed. The false narrative had been sealed into the history documented by newspapers and magazines. And we — the survivors — each thought we were the only ones. Without a force to unite us, and without even the truth to enlighten us, we wasted decades not meeting each other.

We had to make this film.

American thalidomide survivors come together in this movie to participate in #settingourstorystraight. We are the living reminder that thalidomide was, and is indeed, a part of American history. And we are able to celebrate new friendships in a way we have never before known them.